This is very interesting. Is this legit? We should know in a few hours. There is apparently a secret message on the back of the map that comes with the Collector’s Edition of Grand Theft Auto V. But there is a catch. Apparently this required a UV light to see. Yes, you might be asking yourself why somebody is using a UV light to look at their GTA V Collector’s Edition swag. A bit odd to say the least. That said, there are photos! (Update: New secret messages have now been found on the front of the blueprint map. Details here)

Okay, to answer the question of who scans a GTA 5 blueprint map with a UV light? Well let’s start with something that Rockstar said officially.

“The blueprint map in the other editions does contain plenty of additional information and secrets on it.” – source Rockstar

Next question, and I asked myself the same question. Who would get a UV light to try this? Whelp, check out the last image below. See that pen? Apparently that is a UV pen light. If that came in the package, then it does seem plausible to figure this out. Good for you (Mr or Mrs) November17R3 from Reddit! It turns out that in fact the UV pen light does not come in the Collector’s Edition. Here is what November17R3 says:

“Well, I was at a release party that was shown on tv. We got a t shirt there and a pen that looks like a pen but actually is just an UV light!”

The secret message on the back of the map reads: 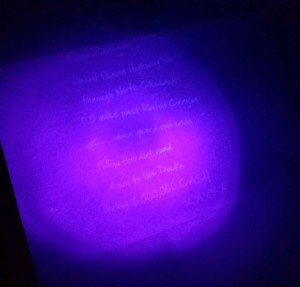 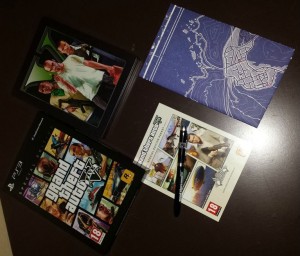